Hello, my name is Steve Harvey, and I am a Life Scout. I was so close to earning my Eagle Scout rank. Dad told me that earning the rank would open many financial doors for me, that I couldn’t even begin to imagine. For whatever stupid reason I could say, it comes down to it that not earning my rank was a protest against my parents, a choice against my dad. I rationalized that he wanted it more than I did. Of course he wanted me to complete it, but not for himself, but because like many parents, he wanted the best opportunities for his son, me.  Of course, I am writing this blog not too far removed from the age he was when we had our arguments about this topic. So hindsight is indeed 20/20. My sincerest apologies for all the times I thought you weren’t so sure of yourself, Dad. 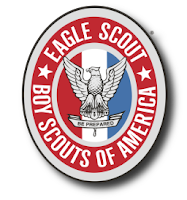 How close was I to Eagle? Our host church, Sierra Vista Presbyterian Church approved my project. Our Council approved my service project. My troop had completed it. I had earned all but one requirement for a single merit badge, Lifesaving. That requirement was earning the Swimming merit badge. I had all but one requirement for that merit badge as well. That requirement was to float on my back for 30 seconds. So there you have it. I was 30 seconds from Eagle. I instantly regretted that decision at 12.00.01 am on March 16, 1988, and even to this day.
When I first chose dad’s alma mater, the University of Arizona, funds weren’t so important to me. Yes, I saw a few scholarships for Eagles. But when I went to Bible College, Ozark Christian College in Joplin, MO, to be precise, I became acutely aware of how much I needed help. I was given a book to borrow from the financial aid office listing all sorts of scholarships and grant available. What I didn’t realize was that there were a LOT of scholarships for Eagles going into the ministry. There was nothing for Life Scouts, or for those who’ve aged out of Scouting. I was both. {Reread the last sentence of the previous paragraph.} The book contained dozens of different scholarships, at the time, for Eagles. Many were only partials, or short terms. Several though, were full ride, even for a private school such as Ozark.
Yet there were no exceptions. I had to have earned the Rank of Eagle Scout in order to be considered, or even apply for that matter, including a letter from my last (or current) Scout Master. I wished I could have found one, but there was no loop hole to be taken. My choice, not my dad’s, not my Scout Master, not even my fellow scouts (all of whom could not fathom why I’d stop so close to the finish line), made this choice for me. And because of this choice, my options for financial aid that was available to others, was not available to me. Was it fair? Even as I was reading from the book, I knew it was. This was a direct consequence from a choice I made. I have to own it. I do own it.
So why do I share this with you? As a culture, we are backwards. We have the freedom to do anything. But we also need to realize that there are privileges or consequences to the choices that we make. Paul puts it this way when he wrote to the Christians of Corinth, he stated that though everything is permissible, not everything is beneficial. He stated this twice in one letter, once with regard to being pure in life, and then with regard to selfish desires and ambitions (1 Corinthians 6.12 and 10.23).
Just as I was not able to apply and enjoy the scholarships reserved for Eagles, even though I spent my entire youth in Scouting, so some choices that are made lack, and rightly so, certain privileges and benefits. Just as today, though we are free to make certain choices, some of those choices will forfeit certain privileges.
Some of the choices we make may not just forfeit certain privileges, but even become dire to our own wellbeing. Some choices we make bring life into the world. Some choices we make could end a life. Some choices can further a career, while others can stymie it. (Once I worked out at the Circle K on 95 at Ave 9E, graveyard shift. After several months, I thought being out there, miles away from town surrounded by farmland for as far the eye could see, I would ever only be graveyard shift, so I changed jobs and worked for Texaco next to the Police Station. When I saw my former boss, Andrew, a week after leaving Circle K, he told me had I talked to him first, he had already put my name in for an assistant mangers position at the Circle K store on AZ Ave and 24th, less than a mile away from where I was living.)
My point is that most of what we go through in life, the joys and the hardships come from us making choices before we consider the ramifications.  Sometimes we will be blessed by the choices we make. (Looking back, it was my time with Circle K that had more positive influences on my walk with Christ than any other secular job I’ve had since. Fascinating...) Sometimes the choices will lead us where we may not want to be.
Ah, but then that is the rub. Rather than taking ownership of our choices, we demand of others to make the end right, even if it is wrong.  And though likely we, the nation, will legislate morality here, it still comes down to a choice. Do you own that choice and all the ramifications, the blessings and privileges as well as the consequences thereof?
Posted by Steve Harvey at 2:36 PM No comments: